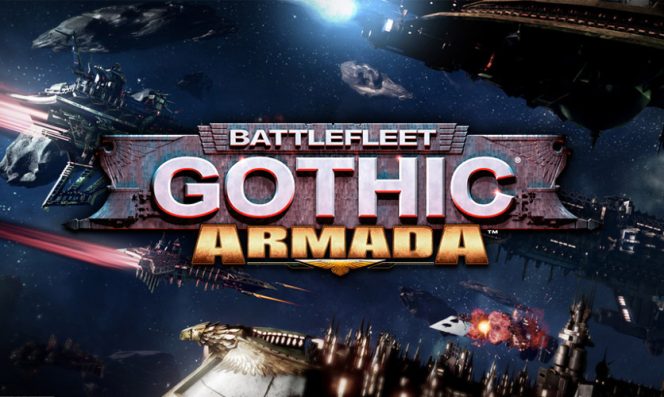 Love the Emperor for He is the salvation of mankind. Obey His words for He will lead you into the light of the future. Heed His wisdom for He will protect you from evil. Whisper His prayers with devotion, for they will save your soul. Honor His servants, for they speak in His voice. Tremble before His majesty, for we all walk in His immortal shadow. Burn the Heretic, kill the Mutant, purge the Unclean, in the name of the God-Emperor.

We haven’t seen any interesting 40k games since Space Marine and Dawn of War games (we still haven’t played Eternal Crusade). It’s well known that Games Workshop, the people who created the 40k miniatures, have been handing out their license to everyone in an effort to collect on that sweet gaming cheddar. This time however, Tindalos Entertainment managed to perfectly translate the feel of Warhammer 40k universe into their game. From design, to voice acting, everything fits perfectly into fiction of Warhammer 40k. When the popular YouTuber AngryJoe visited the developers, they recited the whole prayer to the Emperor for him, showing that they respect the universe, that they painted a miniature or two, and that they are gamers who want to properly represent 40k. 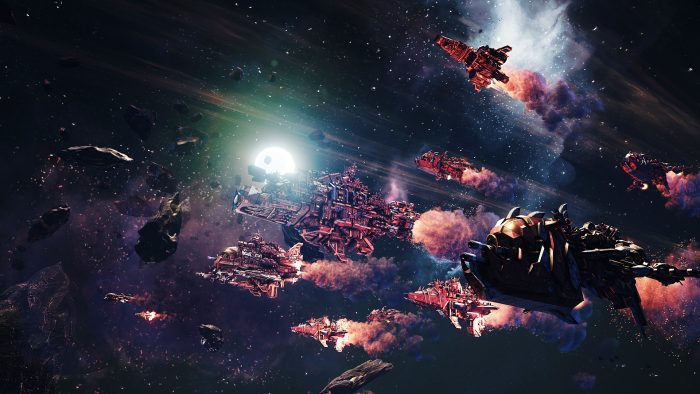 BGA is a real-time turn-based strategy. What? Yes, you read that right. The game plays out in two phases: the first one takes place in the galaxy segment, where you pick missions, upgrade your ships and monitor opponent’s progress; and the second one in which you manoeuvre your ships in real time and send them forth into combat.

The plot is a classic 40k cliché, as it should be, and follows Abaddon as he mounts an invasion on the Gothic sector. Fans of the 40k universe will immediately recognize Abaddon’s name and character, as the big bad of the universe. You take on the role of Admiral Spire who’s assigned to defend the Gothic sector from the invasions of Xenos, Mutants, Heretics, and all of them together. Not a simple task. 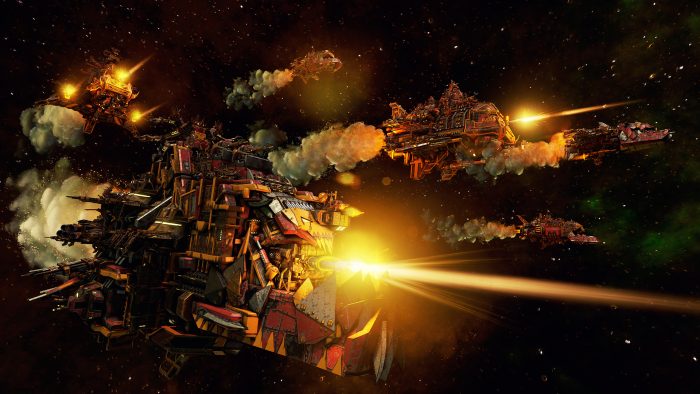 You start the game on the map of the Gothic sector on which you can survey a host of planets and constellations that make up the sector. Each planet has different attributes and give you different benefits, like for example, cheaper ship construction, increased XP gain, upgrade discount, etc. It’s important to note that you start out with all bonuses, but lose them one by one as planets succumb to invasions. The campaign takes you through primary and secondary missions and you gain points by winning and losing (yes, the game allows losses) which you spend on ship upgrades and building of new ones.

The second phase are the real-time battles themselves, and it’s great! A battle takes place on a 2D plane and the developers commented that they didn’t want to include the 3rd dimension because that would overcomplicate the game. And by the Emperor, they were right. At the beginning of a battle you deploy your units on your starting line. There you can organize your ships into squadrons and formations in accordance with the goal pertaining to the mission you’re on. When you’re all set, press the “Ready” button and chaos ensues. Although the 2D map has nothing special to offer aside a few asteroids, mines and gassy sections to hide in, the battles are difficult, challenging and complicated. Your ships can have various abilities for maneuvering, range finding, special weapons, and other options that you have to use in combat if you are to win. 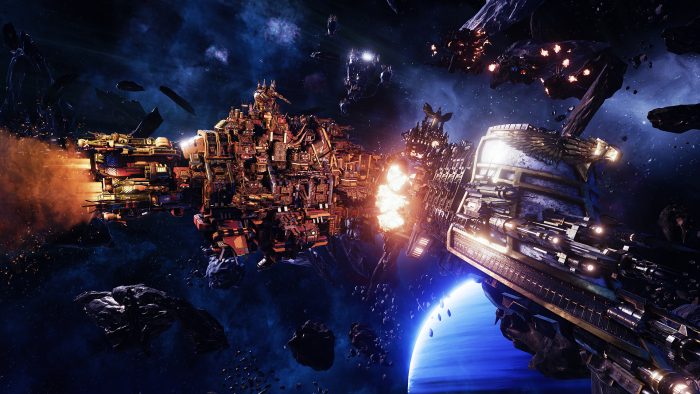 Parts of exploding ships will be flying everywhere, you’ll see torpedoes gliding towards you and testing your reflexes to quickly change your ship’s course and turn hard right to avoid certain destruction. You’ll experience mutinies if a ship takes too much damage, so you’ll have to execute the captain and replace him with a new one. Ships will assault one another in an attempt to board or teleport troops, and the Unreal engine captures it all in beautiful detail. Each ship is designed down to the last detail and true to the 40k universe. If we really had to nitpick, the only thing that can’t be seen are the crews running around. Do note that these ships have crews of 30.000 members and more – and huge cruisers number in 100.000+ crew members, making it quite difficult to pull off. 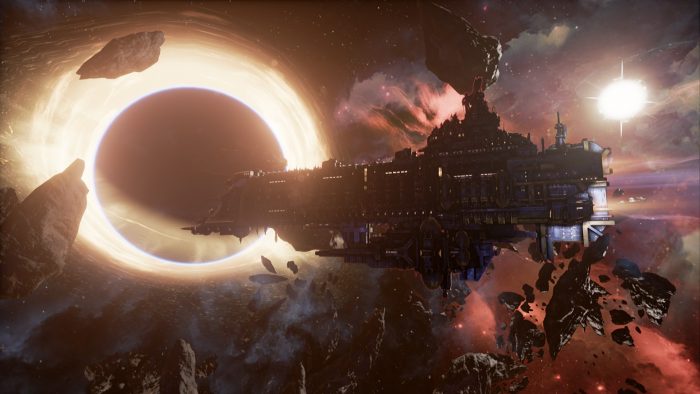 During the campaign, you’ll play as the Imperial Guard, which is one of the four factions available at the game’s launch. More factions were announced to come out as DLCs, and the first one will be the Space Marines. Along with the Imperials, in skirmish, custom and multiplayer modes, you can play as the Eldar, Chaos and Orks. The Eldar are space-elves whose ships are known for their fragility and strange designs, but have the ability to achieve great speeds and use “hit-and-run” tactics. The Orks are, well, orcs in space. Their ships are ramshackle contraptions pieced together out of scrap. Even the Orks themselves wonder how their ships manage to stay together. They feature low maneuverability, but high durability, which means they will usually charge forward using their prows to achieve victory. The Chaos Marines worship the gods of Chaos and their ships feature the four gods’ “blessings”. Each of them provides different benefits to the ship and changes its appearance accordingly. You’ll get to see enough tentacles to last you a lifetime if you play this faction. 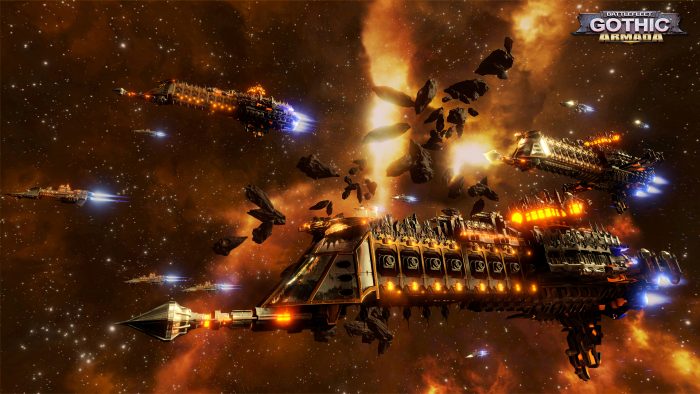 Modifying and upgrading your ships is both detailed and extensive. Each ship class (heavy/light cruiser, frigates, transports, etc.) has its armaments that you further modify with various perks. Along with the ship itself, you can also add special abilities, like bombs, boarding, etc. You can also upgrade the crew, i.e. the ship’s officers. For example, if you upgrade the Commissar, there will be a lower chance of mutiny on that ship.

The voice acting sounds authentic and represents the 40k universe very well. The character cinematics are semi-animated comics, while full-engine cinematics are used for ships. The transition between the two types of cinematics somehow works beautifully and evokes both the story and the universe. Boring text pop-ups during the missions will progress the story onward until you reach an important plot point, which somewhat hinders the tempo set at the beginning. 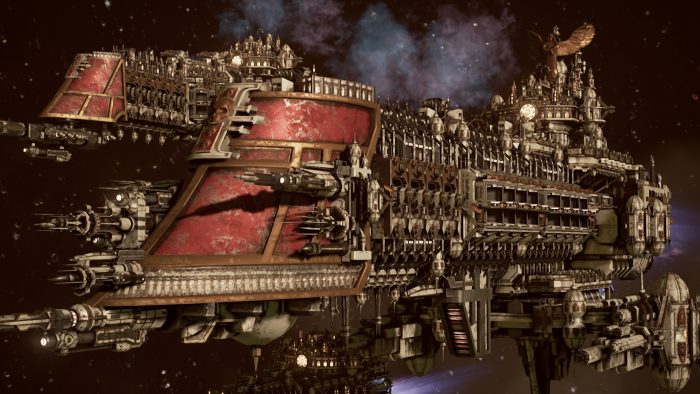 Initially, newcomers won’t have a good time.  People who have never played strategies will give up after the first mission. The game is difficult even on lower difficulties. The tutorial is bad. It tries to teach you all of the game’s mechanics over a short period of time, and the difficulty curve is so bad that you’ll already be confused during the first mission. Micromanagement is at the core of this game, so you’ll have to take care of every ship that you brought on the mission. This is somewhat alleviated by slow-time mode which is enabled by pressing the spacebar, giving you a moment or two to gather your thoughts and think about how to proceed. The enemy AI is very smart and knows just when to retreat and when to attack. And this is weird, because the AI of your own ships is terrible. On more than one occasion we would order our ship to attack, only to have it continue drifting on through space. Tactical trajectories that your AI follows are useless, so you’ll have to take care of each ship on the map. In the later missions that number can be quite significant. The maps are too empty. Even though the beautiful backdrop behind the 2D plane depicts other planets and systems, including the Eye of Terror, the black hole which spawns all Chaos, the game area is empty and offers few options for strategy outside of maneuvering. 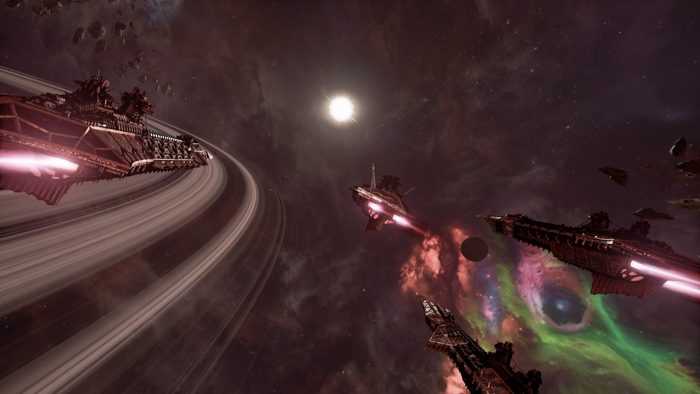 BGA is an excellent strategy and an even better 40k game. Its difficulty will turn away newly intrigued players, but will keep the fans of the universe, strategists and probably Dark Souls players. This game has seen the light of the Emperor and spreads His truth with honor and we hope that the other developers will start using the 40k license like Tindalos Entertainment did – the Emperor’s chosen.