http://mirziamov.ru/product/zaym/webbankir/You may or may not remember the movie Hackers from the mid-‘90s. If you can’t remember the endlessly cheesy “Crash n Burn” jokes and other wacky nicknames that characters gave themselves, then what you certainly remember is top-notch electronic music and the famous underground club scene – the one where the main character competes against Angelina Jolie in a futuristic race using a cool contraption that afterwards all of us wanted to try out in our arcades, but never could. Still, we always remembered that game, ‘cause that was Wipeout. Many years have passed and a chance to see a new Wipeout is all but gone, but luckily smaller studios are working on similar games. 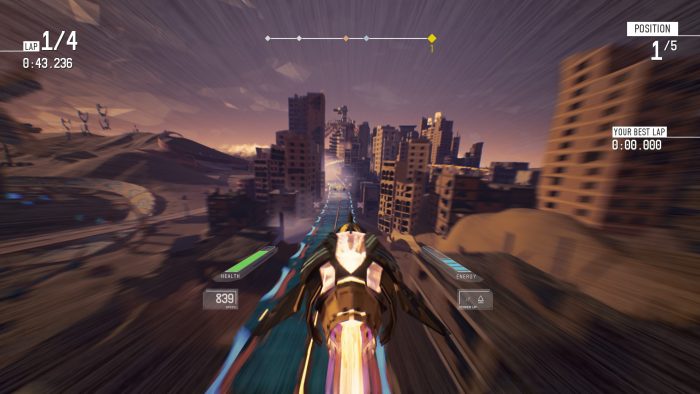 Redout is just one such game. And what’s more fascinating is that it’s not work of some huge studio, but was made by a group of enthusiasts who also craved more insanely fast futuristic racing. As noted on their Steam page, the game was clearly inspired by Wipeout, but also F-Zero. Therefore, it’s easy to think of it as merely a clone, so let’s see what distinguishes Redout from others in the anti-gravitational racing subgenre. 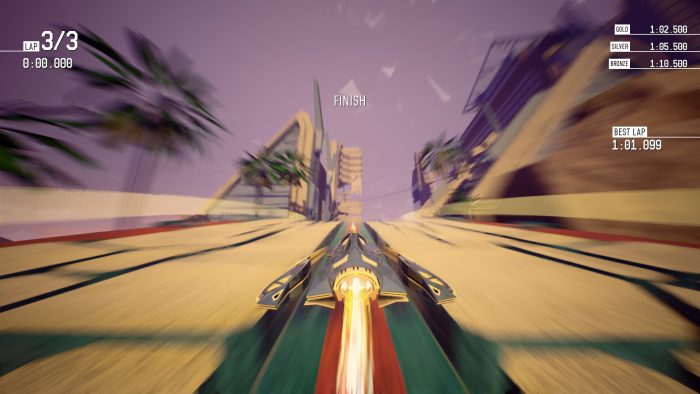 At its core, it keeps to the formula of having a craft that hovers above the race track and is affected by various forces such as inertia and wind resistance, and it’s up to the player to compensate and avoid skidding his craft. The game uses both analog sticks to play (yes, a gamepad is mandatory!), so the left one is used to steer, while the right one activates thrusters that push the craft left or right, i.e. shift its tip vertically. Skilled players will not only be able to avoid skidding their craft, but will be able to make any turn without having to let go of their power button. The technique of redout and blackout is interesting – sharp force shifts influence the driver’s bloodflow, making it rush to his head or feet, which are simulated by screen tint shifting to red or darkening to black. This doesn’t influence the gameplay, but is a great addition that serves like a small hint on where you need to adjust your craft’s position. 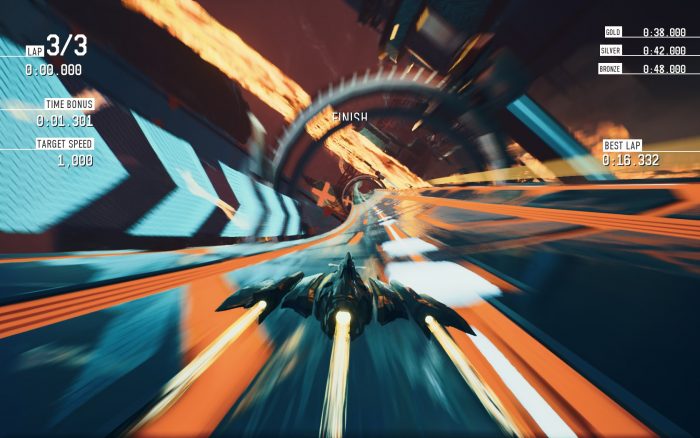 The driving experience is amazing! Without a doubt, this is one of the fastest games we’ve ever played and you won’t be able to blink as landscapes zoom past you and you leave your opponents in the dust. A balanced dose of motion blur helps the experience, and the camera jitters when you activate temporary boost. Track design is also great, with many sections to go wild on, numerous turns and jumping points. The race craft is difficult to destroy because it regenerates if you avoid crashes, and you can use that energy on boost activations or activating small decoys that you can add onto your craft. That does not mean that you’ll be able to simply zoom through the game. Initial races can really make you sweat (this should have been patched as you’re reading this) because of the very aggressive AI, while after 2-3 races the situations mellows down by quite a bit and we were able to win gold medals even on initial tries. 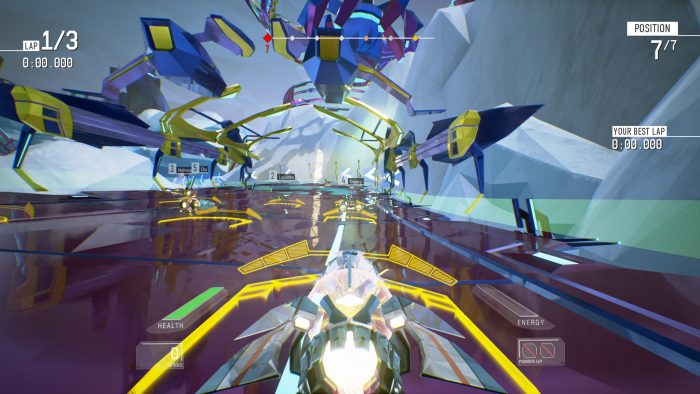 A game like this must be an audio-visual bomb, and Redout manages that effortlessly. The powerful Unreal 4 engine powers the game into smooth 60 frames per second, and the visual style combines polygonal models with futuristic architecture. The effects can be a bit overbearing, so you might want to turn them down a little for a better overview. The background music is comprised of top-notch electronic and if it featured Prodigy’s Firestarter we might have felt that we were playing a new version of Wipeout. While it’s fully 5.1 supported, the music also adapts to what’s happening, so for example, bass’ quiet down during long jumps. Controller support is excellent and we had no issues playing with both Xbox and Steam controllers. 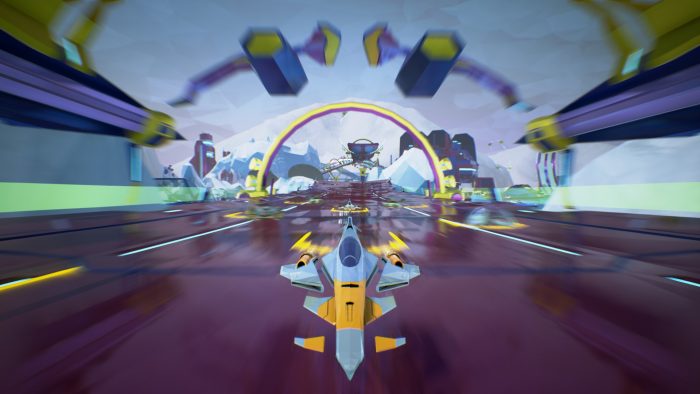 The only disappointment comes in the form of little variance between the surroundings you zoom through. With only four of them, some tracks will look too much like one another and won’t feel as memorable as some from F-Zero X for example. Other than that, we couldn’t find any other major flaws and are pleased to say that Redout is just the game that all fast sci-fi racing fans  have long been waiting for.