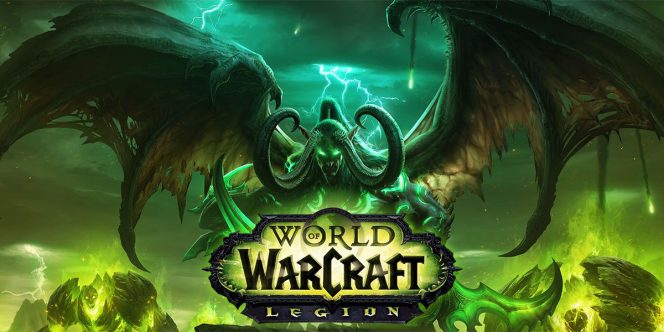 The clock tower strikes 3. It is deep in the night, yet no one’s sleeping. All of Stormwind is on its feet. Women, children, the elderly, soldiers leaving their barracks in a row and marching toward the harbor. The kids peek cautiously behind their mothers’ skirts asking who are these men in metal armor? I am among them. Our mission is simple but deadly. To strike the very heart of the beast, the Broken Shore. To stop that accursed warlock in his intent to unleash Sargeras upon us. We thought it was all over on Draenor, at the Dark Portal. That we’ve rid ourselves of Gul’dan and his schemes once and for all. But Azeroth is apparently doomed to eternal war. Peace never lasts long. There is always a new threat. 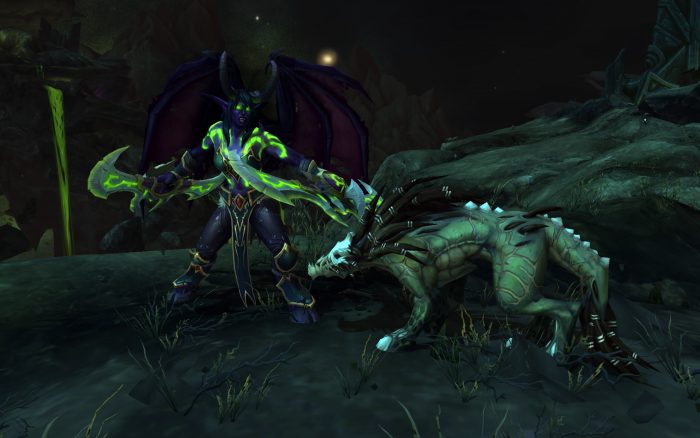 We board the SkyFire, the order is clear – land on the Broken Shore and merge with Varian’s and Tyrion’s troops. The king himself departed with the first wave, but we heard nothing of them since. Did they make it? Are they alive? Nonsense! The Lion is alive, he is immortal. As we draw nearer a tall green beam lights up the night sky. A call to arms, the ship’s guns pour molten balls onto the flying demons. SkyFire doesn’t stop; in a dangerous maneuver hovers near the shoreline where we disembark into the shallow waters. The hellish armada is already ashore, waiting for us. The battle is fierce, ruthless. Greymane, the old wolf in his worgen form reaps death through hordes of demons. The very sight of him inspires all of us. The coast is ours; ships are landing, the legion of Stormwind forms. 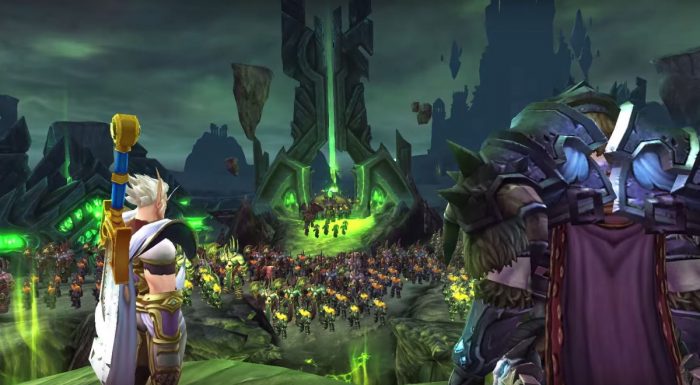 We move into the isles. Scattered bodies are everywhere – fallen champions of the elite king’s guard and Argent Dawn. They took many of Sargeras’ followers with them. One is still alive. Trying to say something important, but what? The Lion lives, he’s fighting on the cliff. We see him. Greymane’s worgen howl, onward to Varian. Nothing can stop us now. The battle is short and efficient. They obviously didn’t expect this kind of valor and dedication. They’re retreating, now is our chance to strike at the very heart of the invasion, at Sargeras’ nest.

Suddenly we hear the sound of a horn to our right. The Horde! They made it. With Sylvanas leading the strike, they move through the demon ranks as if they were mere rats. Everyone is there- Vol’jin, Baine, even Thrall, and they’re all ready to stand shoulder to shoulder with the Alliance against Gul’dan – no matter the cost. 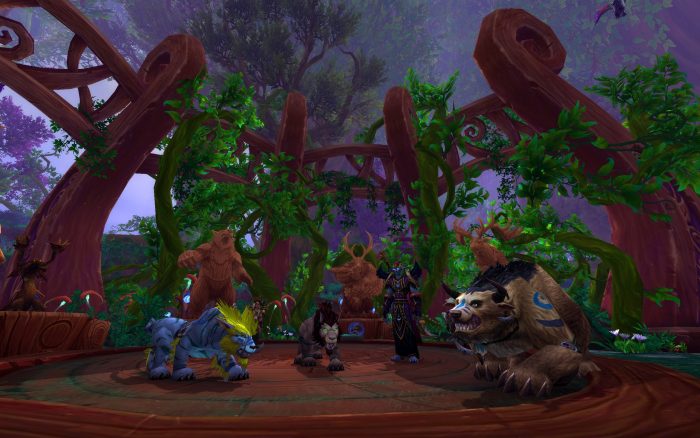 Brief exchange of reports, a split-second decision is made. Varian leads the frontal assault while Sylvanas guards the right wing. The battle is fierce, but the Light is stronger, we decisively prepare for the final strike. And then…

He appears… As if tapping into an unlimited source of power he keeps summoning more and more demons. But we are unstoppable, we press on. Victory is at hand but the sound of a horn cuts through the air again. Only this time it’s different, ominous. Something is going on at the wing; the Horde’s archers are falling back. NO! Impossible, she can’t leave us like this? Betray us?

SkyFire! It arrived just in time and a retreat is called. As we climb the ladder a Reaver rises and grabs hold of the ship’s side. Pulls us all to our deaths. But the Lion is brave, he doesn’t give up, he is the LION. Right before us he jumps off the bridge. Straight at the metal monstrosity. Straight at Gul’dan. Straight to his death. 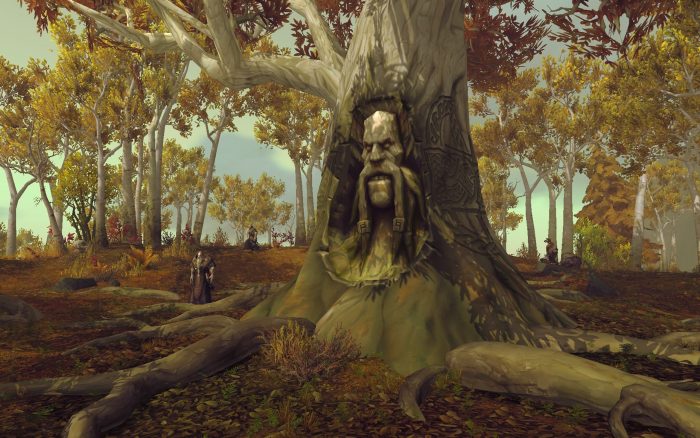 Blizzard has done it again. Is it a surprise or not is open for debate. But the fact remains that all of their games are “condemned” to succeed and Legion is no exception. The newest expansion to legendary WoW brings everything needed to bring a lot of players back to the game. New zones are masterfully designed with hundreds of quests that unravel what might be the most intelligent and complex storyline yet. In order to grasp all of its strings, you need to play all classes or at least be familiar with each class’ story simply because they are all slightly different. This is done initially by Artifact weapon quests, and each has its own little secret. Was Frostmourne completely destroyed, how a bold warlock snatched a mighty staff right under Gul’dan’s nose… or if you’re a fan of Turalyon and Alleria you may be in for a big surprise. We can’t forget to mention the return of Illidan and his army of Illidari demon hunters, the new hero class. Demon hunters are available to both Horde and Alliance as members of Blood elf and Night elf races. They start their journey at lvl 98 in Mardum – the remains of an ancient world used as a prison for demons beaten by Sargeras before he succumbed to madness. What makes them different from other classes is that they only have two specializations: Havoc as DPS and Vengeance as Tank. And that is quite enough to have a lot of fun playing this class or maybe challenge your Death Knight friends to a duel, just to prove whose hero class is more heroic. 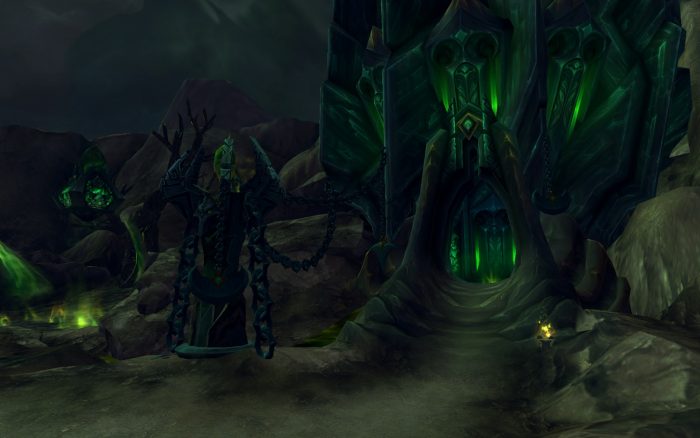 With this Blizzard fulfilled a promise they gave long ago when they presented the Death Knight. The Demon Hunter is here and shall we see the Mountain King in some upcoming expansion remains to be seen.

Also, once the player gets his artifact, he is presented his “class order hall” – a special place that serves as a hub where you can hang out with other members of your class or take selfies with legendary members of your order. This is an evolution of the garrison, yet is much more interesting and as everything in Legion – it has its own story. So the Paladins’ hub is the Light’s Hope Chapel, while Death Knights’ is Acherus. 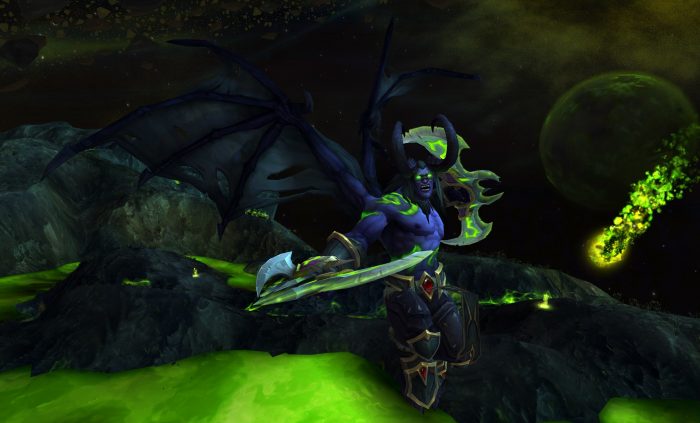 The players wanted a return to the roots and Legion delivered, at least in the context of its storyline and characters. Questing is very interesting, but not too demanding. The instances are imaginative, woven into the storytelling and contribute to the overall experience that we’ve gone back 10.000 years into the past.

Many new cosmetic options have been implemented, all class talents have been redesigned and there’s also another big innovation. The new PvP system, with a special set of PvP talents, but we’ll cover this in greater detail in a month, once we’ve spent enough time in Battlegrounds.

To sum it all up: Legion is a complete success and only now we see that WoD actually made sense even if some players didn’t like it in the end. WoD was a prologue for the incoming invasion and now it’s up to heroes of Azeroth to organize and save the world from destruction yet again. For Azeroth!