Prequel, introduction, Chapter 0, the game before the game. No matter how we call them, publishers simply love making them to broaden the story of their virtual universes and, of course, take a few more green bills from us. Capcom wasn’t immune to that either, when they decided to publish their Chapter 0 over a decade ago, the game that serves as an introduction and explanation to everything that happened before the first Resident Evil game. Originally, it was a Nintendo Gamecube exclusive, but now we’ve got the chance to play it on all other platforms.

So, we return to the very beginning of Resident Evil – the moment before all the zombies and meddling by the Umbrella Corporation. And that moment are – leeches. Or alternatively furious slugs. Already in the opening animation we can see them being the product of a person in a white cloak that’s trying to take revenge upon the Umbrella Corporation by attacking a train. Yeah, a grandiose evil plan indeed. That’s where STARS forces enter the stage led by Rebecca, one of the game’s lead protagonists. Without further delving into spoiler territory, we can only say that what follows is a classic RE story. 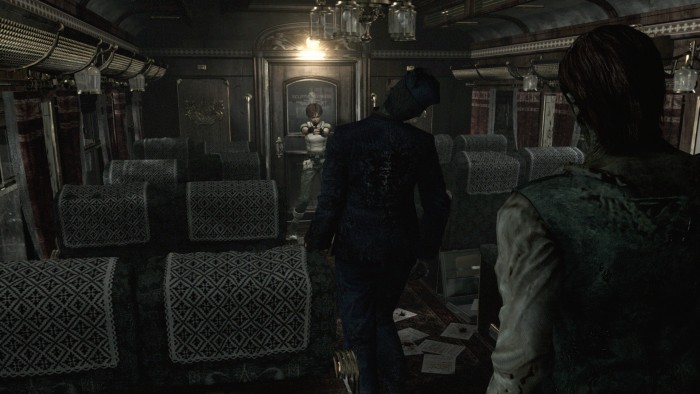 We have mentioned Rebecca as one of our protagonists. Throughout the horrors her compatriot will be Billy Coen, an ex-marine en route to his execution for mass murder who, through a strange series of events, escapes the police vehicle and ends up in a no less deadly scenario. From the moment they join forces, you will lead the two characters simultaneously and be able to switch direct control from one to the other at any time. There’s also the possibility to issue simple commands, but most of the time the other character will be controlled by the computer, whose AI’s not the best out there and who uses way too much ammo. Leading two characters also means juggling the items between two very limited inventories with only nine slots each. RE always had that silly logic when it comes to inventory management where you could carry a hundred bullets or two cans of gasoline in one slot, but every leaf of grass took a slot each. You’ll be seeding items everywhere just to clear up enough space for a key item that you need to open a passageway, or a weapon that you’ll only use once on a particularly difficult enemy. The constant walking to and fro just to pick up ammo and healing items you had to leave previously is an artificial way of extending the game and will get on your nerves pretty fast, especially because the transitional animations between the rooms were left in – a former mask for the loading screens. 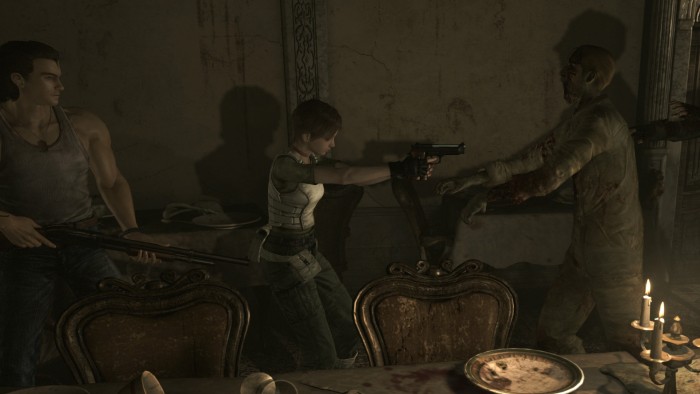 Luckily, the atmosphere is still that good old mix of claustrophobia and tension where you have no idea what’s waiting around the corner. The foreboding is permeating every room of the train, as well as the enormous villa in which you’ll spend the second half of the game. The zombies themselves aren’t as scary as they used to be back when the series started, but at least there’s the fantastic surround sound effects and camera angles which were always the series’ trademarks. If you really want a retro experience, you can switch the controls to classic scheme, the so-called “tank manoeuvring”, and play using your D-pad instead of the analog stick. Content-wise, the game is identical to it’s original Gamecube release, which means that there are no new modes or bonus segments. The only major improvement is the visual element, which is a giant leap even compared to the Nintendo Wii re-release. The scenes feature further enhanced lighting, detailed textures and other details that weren’t supported by the old hardware. However, it’s uncertain why the cinematics didn’t undergo the same treatment, because the transitions from sharp graphics to blurry cut-scenes are painfully obvious and needlessly ruin the overall good impression of the Remaster. 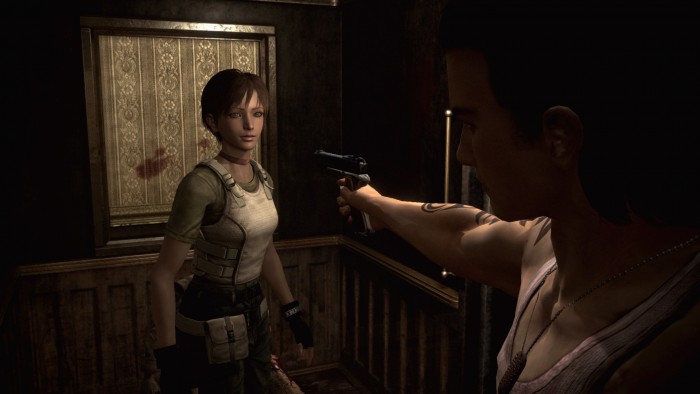 The quality of RE0HD is not much better than the last year’s reissue of the original Resident Evil, not really because of the lack of anything new, instead because of the fact that the original “Zero” was one of the weakest games in the series. Capcom managed to create an excellent remaster, but had also missed an opportunity to improve upon the game that even back in 2002 lagged behind the rest of the industry. Therefore, RE0 remains the game that’s going to be played only by the series’ biggest fans.