After many variations of multiplayer which Ubisoft tinkered with over the years on their single player games, now we get to see how they fare in full MMO genre, or at least their approximation of it. Tom Clancy games were always permeated by a dose of realism while showing how a Special Forces unit operates – sometimes more, sometimes less, and that is the case with The Division, which has in most cases missed the point of realism by a mile.

This scenario conceived from the nightmares of some conspiracy theorist, and which could easily fit into a season of the show “24”, starts with a huge Black Friday sale during which huge amounts of bills enter the circulation, laced with a new synthetic and highly contagious virus. Fast forward a bit, and we can see the disease spreading with no signs of slowing down, or of a cure in sight. New York City, the epicenter of it all, gets quarantined with most of its population left stuck inside. This is where you enter the picture, as a member of a clandestine organization known as the Division, formed to operate just in case something like this happens in an urban environment. Your mission is to check in with a safe house in Brooklyn and then move on to central Manhattan as soon as possible to join up with other agents in investigating the mysterious origin if this virus, as well as subdual or removal of any threat to citizens who are still in the quarantine zone. 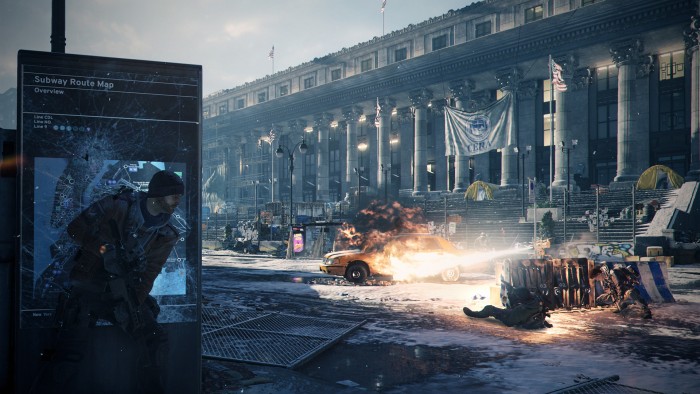 During the tutorial mission in Brooklyn, you’ll be introduced to the basic gameplay features, from weaponry, to interactions, to principles of each mission moving forward. After you arrive on Manhattan proper, you will get a base which will act as your command center. Furthermore, the gameplay can be broadly split into three unequal key elements. There’s the 3rd person shooter, i.e. that which will be on the forefront when comparing The Division to the other games from that genre. It features unavoidable view from your character’s back, and intricate investigation of all small walls and covers in the game that could help you survive the fire fights which become more difficult as you progress and which will require constant maneuvering and tactical positioning. There are main missions and side missions, as well as a number of collectible items which further portray the horrors of such a catastrophe and show the lines that people are willing to cross. The most important missions are split into Medical, Tech, and Security; the main missions will be tied to the storyline of investigating the virus and securing the zones around Manhattan, while the side missions provide you with additional points to upgrade your base. This is where the RPG element comes into play, and although it’s not the main focus, actually takes up most of the game. Namely, most of the systems featured in all RPG games, such as various skills (represented in the form of high-tech gadgets), talents and perks that you’ll unlock and upgrade as you grow your base, the unavoidable crafting system that becomes valid only in end-game, and loot, i.e. the gear you’ll constantly collect from fallen foes to further improve your character’s stats. This particular system will reach uncontrolled quantities of random gear and give you flashbacks to games such as Borderlands and Diablo. 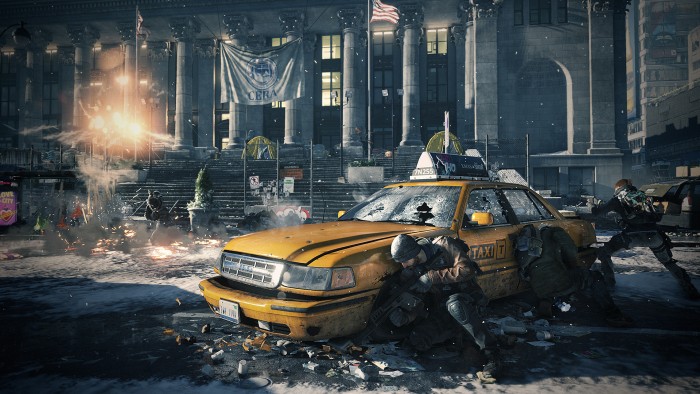 Although The Division is classified as a shooter, it kind of misses the point of it when your opponents are sponges that soak up full clips of bullets to the head without falling. The whole combat system comes down to increasing your own numbers to be able to use them to decrease the opponent’s numbers and therefore emerge victorious. Of course, in the end there’s the MMO part of the game. Although it’s actually totally possible to go through the whole game solo as if you’re playing a single player game – because as soon as you leave you base or safe zone, you’re able to walk around New York by yourself, but it’s a real treat and much more fun to have three of your friends join you for that walk. The Party and Co-Op systems are very well executed, from being able to gather random players to join you from the safe zone before each main mission, to the option to use in-game voice-comms for better positioning and tactics, to the ability to practically teleport to another teammate’s location as long as you’re not engaged in combat. You will definitely need a team if you plan to enter the Dark Zone, a purposefully cut off zone at the heart of the map, which is not only constantly patrolled by stronger and more numerous versions of the enemy, but many other Division agents as well. This other point would be helpful, if this zone wasn’t open hunting grounds for everything, including other Division agents, the purpose of which is acquiring better and more valuable gear than is available in normal zones. This is where you’ll experience some of the most challenging and rewarding moments in the game, while you sneak around deserted streets and cooperate with random players that suddenly appear in your vicinity. Also, as long as you’re in DZ zones, the voice-comms are open to everyone and if they’re close to you, they can hear you! 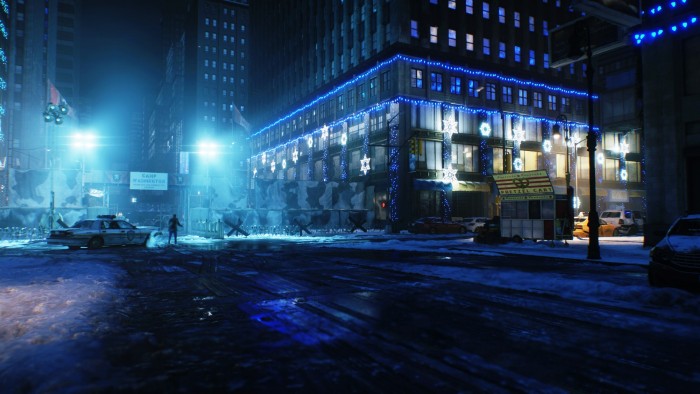 Although the game’s graphically weaker than what was first shown on E3 a few years ago, it still holds up rather well. Along with a 1:1 representation of Manhattan, the graphics successfully convey the atmosphere of a an abandoned, lawless city, which is further accentuated by meticulously added details everywhere you turn, weather conditions, day/night cycle, as well as small details and changes on your character. The biggest criticism to all of this has to be pointed at the character creation system, which provides you with bare few essentials – a few options for face, hair and details; you are bound to run into a few clones of yourself during gameplay. On the other hand, the sound quality provides a realistic addition to the game, and along with solid voice acting, the sounds of weapons and shots are on point, as well as a fairly functional voice communication system which is very serviceable after only a few tweaks. 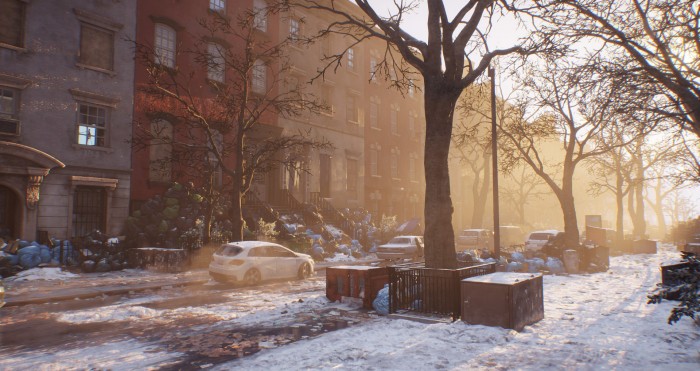 When it comes to the end-game, or “what to do when you’ve completed all missions and reached level 30”, that is when the grind in vein of Diablo 3 begins, as you look for the best combination of stats and gear to fit your play style so your character can be the toughest on the block. The best advice would be to collect all materials until max level, and salvage all gear for materials as well, so that your gameplay doesn’t turn into a total grind fest or a boring hunt for materials later on. 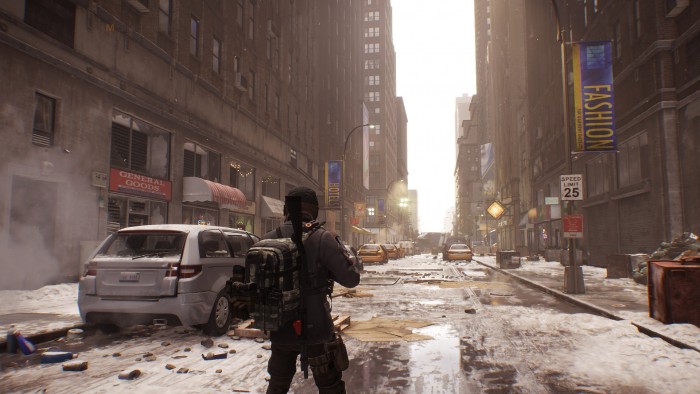 While on the topic of grinding, let’s mention a few negatives that might, or might not be fixed, first among them being the lack of a distinct PvP system. If you rush into the game too voraciously, you could get burned out and the game might became super boring due to lack of variety in opponents and missions. Another big criticism is that the game actually draws a lot from the RPG genre when it comes to gear, so no matter how good or experienced you are as a player, if your gear is sub-par, you’re going to struggle in combat. Conversely, when you reach max level and equip the best gear, you’ll be able to tackle anything with minimum effort. 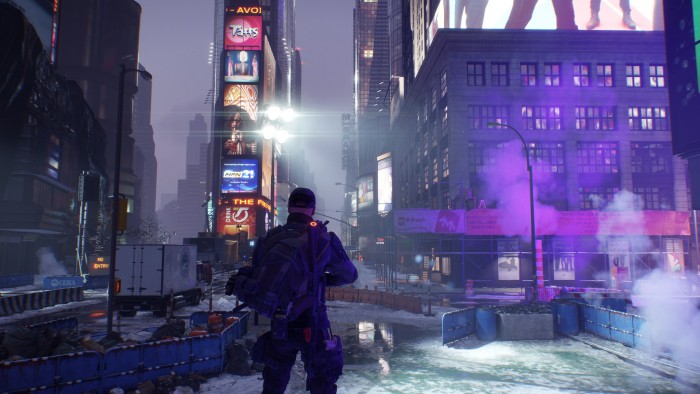 If you come in with the idea that The Division will be an online MMO version of Call of Duty that you can play non-stop, it’s best to move on because this is definitely not it. However, if you want to discover what it would it be like if an epidemic catastrophe strikes Manhattan during the winter, and while at it also shoot, collect loot and have a great time with your friends, you’re more than welcome to join The Division and we’ll see you on the streets of New York.