We’ll be honest with you: we liked this game’s graphics better when it originally came out 18 years ago. The Redux version is too bright and colorful, as if it were set in a film studio (hi there conspiracy theory), instead of on barely lit regions of the Moon, Venus, Mars and other planets, while the original had a dark and foreboding look. You know, making the ships and buildings glow like Christmas trees isn’t exactly energy efficient, nor is it stealthy. Anyway, the gameplay is untouched, and that’s all that matters here. 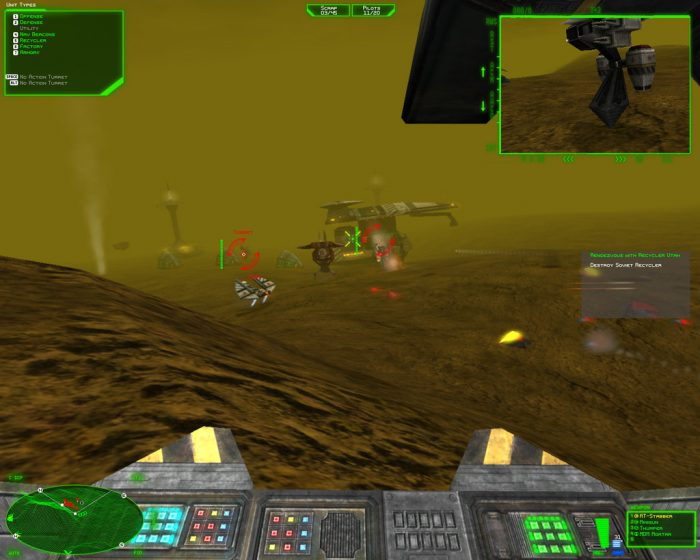 Battlezone 98 Redux is an HD graphics upgrade of the classic from 1998, which was quite an intriguing gem at the time that brought a unique combination of FPS and RTS gameplay. You pilot heavily armed hover-tanks, shoot at anything that moves and doesn’t wear your side’s colors, while simultaneously using a simple first person command interface to order friendly units to follow you and to deploy in a certain location, as well as to order the production of additional units if you have enough resources. Truly awesome stuff, especially because piloting the vehicles is an experience you’ll never get bored of due to truly advanced hover physics which simulate inertia and realistic movement over bumpy surfaces. Bear in mind that the enemy units usually don’t stand in one place while you’re trying to blow them up, and you can imagine how tough it can be to actually play this and successfully complete missions as opposed to looking like a disoriented armadillo. 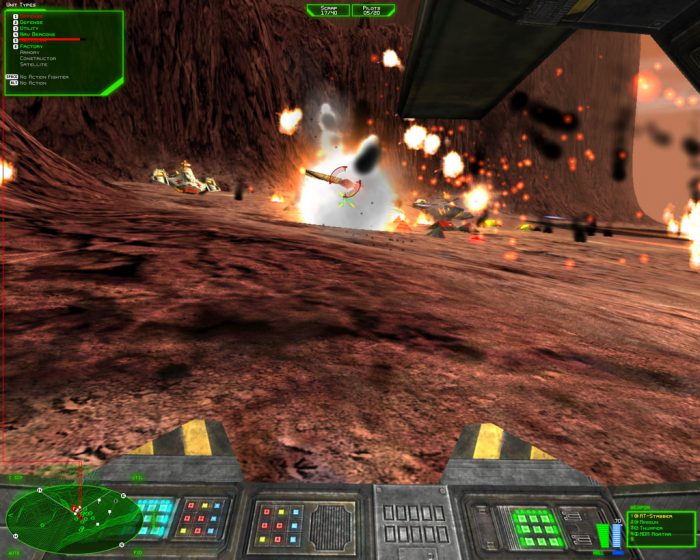 To top it off, you can easily spend all of your ammo if you attempt to spray rockets at enemies, leaving yourself at their mercy and standing there like a sitting duck. Yeah, it’s old school. And yeah, we like it. At least you can’t run out of fuel.

In other words, it’s an “easy to learn, hard to master” type of game. 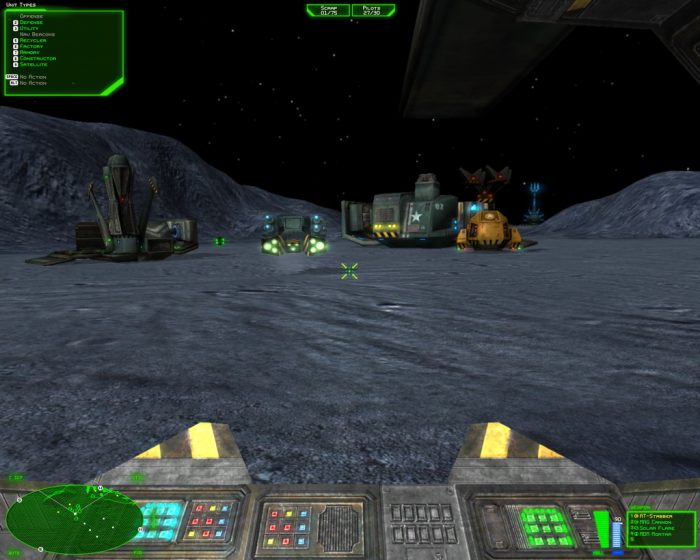 Battlezone is based on the neat idea of United States and Soviet Union duking it out in space far from Earth’s green fields and lively cities, without bothering normal people with their superpower crap. American Space Defense forces are on the Moon, defending the democracy as usual and collecting the resource called bio-metal, used for the production of advanced weapons and technology. Unfortunately for them, they quickly discover that the space is not as empty as they first thought –Team Red is also there and is ready to rock. Those pesky Russians never give up, do they? Thankfully (or not, depending on your view of world politics), there’s also a Soviet campaign, where you aim to destabilize the American establishment in space through ambushes and sudden invasions of their bases.

What saves this plot from being bland is the discovery of alien technology by both sides. Without spoiling anything, it’s not a huge mystery on the level of Nexus: The Jupiter Incident or Freespace, but it’s still a nice touch to an otherwise overdone Cold War concept.

While the American campaign is more or less an extensive tutorial that gradually introduces you to various gameplay mechanics, building types and strategies, the Soviet campaign is an all-out affair. You can use all buildings from the start and build a huge army, so unless you’ve gotten familiar with every available technology and quickly issuing commands to your units, you won’t want to jump into this campaign first. 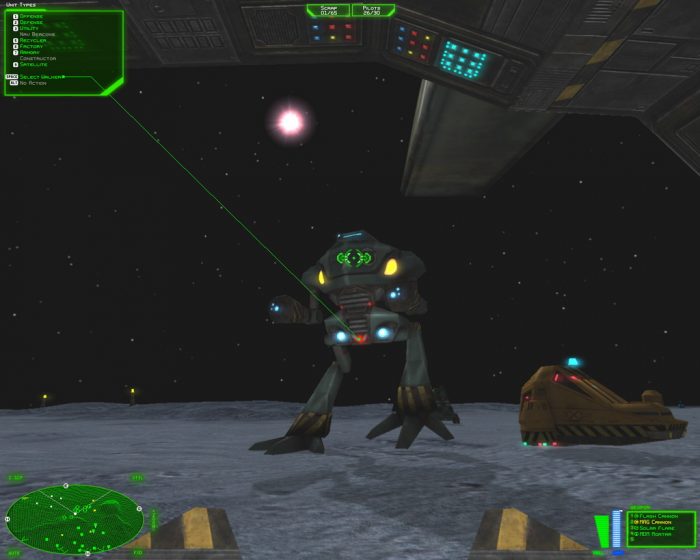 The Recycler is the main building that enables you to build scavengers to collect bio-metal, basic defenses in the form of turrets and more advanced buildings such as Factories and Armories. The first thing you want to do in any mission is send a few scavengers and set up turret defenses around your Recycler. If you want to repel a large force, you’ll also need several tanks circling around the Recycler and other key structures. You can assign your units to follow or defend other units so, for example, you don’t have to be there to escort the Recycler if you decide to move it to a different location. 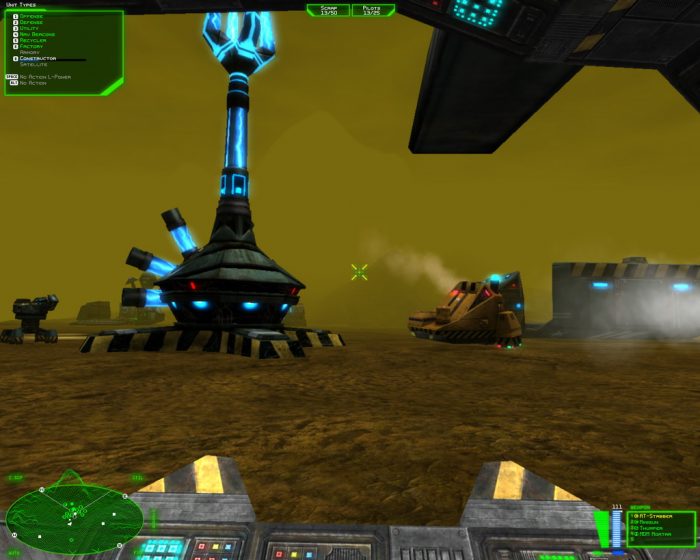 During the attack on a particularly big enemy base, it’s not unusual for your whole attacking force to run out of ammunition. In that case, you either need to quickly get back to your base to replenish your ammo before someone mops you up, or order your armory to launch equipment to your location and sit tight until it arrives. You can even order one of the tanks to pick you up if your vehicle gets destroyed so you don’t have to reload the game or, god forbid, walk all the way back to your base. And if you need to take out strong enemy defenses, build a howitzer – that thing is very effective at destroying tough buildings from a huge distance. Things get especially exciting after you lay your hands on the constructor unit, since it enables you to build power plants and highly advanced buildings for automatic repair of your units and ammo replenishment. 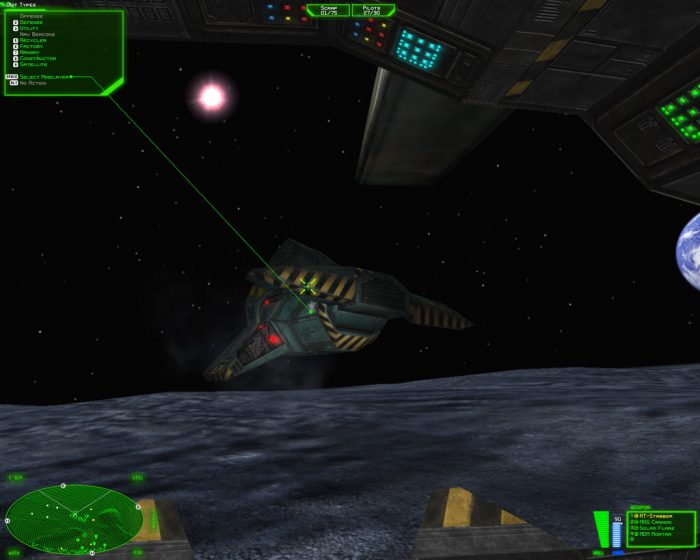 All in all, Battlezone 98 is the tactical gaming equivalent of red velvet cheesecake.

Of course, multiplayer mode of a game like this can’t be anything but absolutely fantastic, with a choice of Deathmatch for a quick shoot-out and Strategy mode, in which you build bases and armies just like in singleplayer. The Redux version also introduces better mod support through the built-in map editor and Steam Workshop integration. It will be interesting to see whether this will eventually lead to Battlezone 3 – you know, the game everyone was waiting for instead of this Redux. 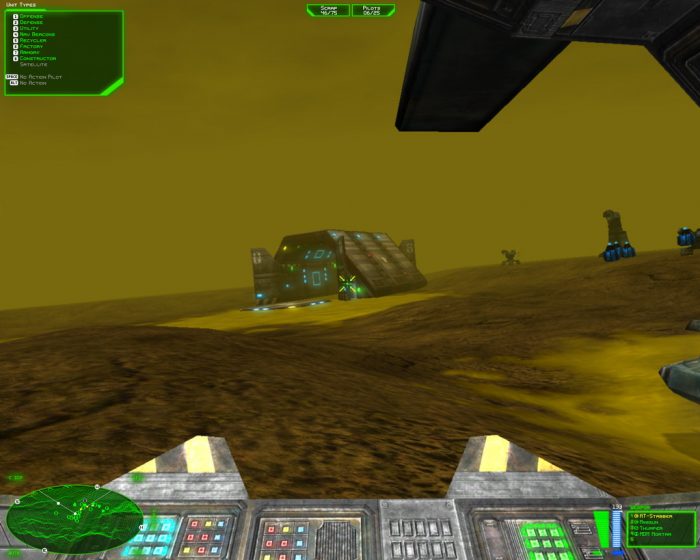 Sadly, the developer Big Boat Interactive missed an opportunity to polish the AI and completely rethink certain units (the walker looks ridiculous and is of questionable use). Although you can fly over the ridges, your units are unable to follow you, going the longer way instead and risking an encounter with enemy units. This way, you can’t count on them to accompany you if you decide to mount a surprise attack on an enemy base by taking a shortcut into an undefended area.

It’s a fun and deep game for sure, but it’s hard to recommend if you’ve played the original. The upgrade simply isn’t advanced enough (for example, it would be fun to have underground bases in the style of Hellbender), while the AI occasionally behaves like a drunken sailor.