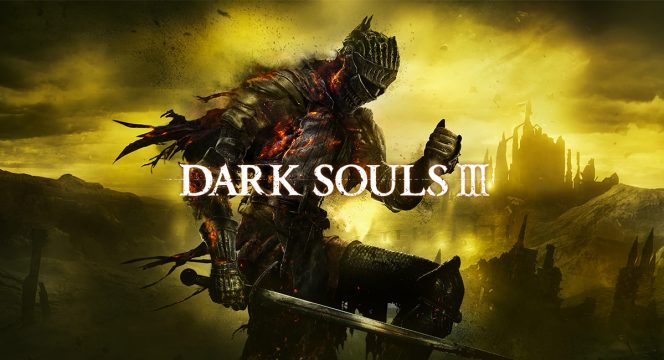 The Souls series has come a long way. Basing its roots from the title Demon’s Souls, it made us appreciate its motto of “difficult, but fair”. Dark Souls 1 and 2 broadened the franchise, not only with tighter gameplay that made overcoming obstacles much more enjoyable, but also opened the door to a grandiose plot which we pieced together with delight. With the Playstation 4 exclusive, Bloodborne, they redesigned their visual style into a surreal world that enabled us to feel more powerful and agile, but also face even more magnificent creatures of the night to test out mettle. And now, seven years since the start of the franchise, we have before us the final part of the Dark Souls trilogy, a conclusion to an epic saga and coming full circle to include all of the accumulated experience and successful recipes from the previous installments. Dark Souls 3 is before us, so let’s not waste any time – it’s time to die!

Something that’s important to mention early on is that even though it’s part of the Dark Souls series, the third game draws a lot of inspiration and successful elements from Bloodborne. All of this could be separated into five major influences on five areas that define a game. If you imagine Dark Souls as we know it as a basis, and add these five elements to it, you’ll get the true picture about this final installment of the trilogy. 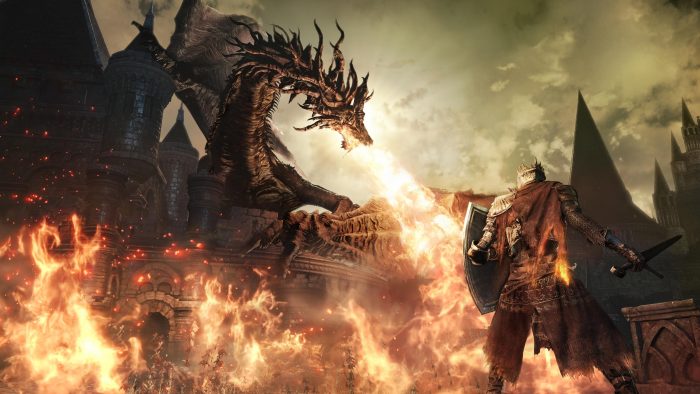 Firstly, there’s character design. The Hunters from Bloodborne were fearless “protagonists, agile and bloodthirsty, their design likely influenced by the cult French movie “Brotherhood of the Wolf”. Although Dark Souls 3 allows you to pick a class, including the “bulky” knights, the influence of this design is highly apparent. And not only with your own character, but with the opponents as well, many of which now boast that certain note of “bloodthirsty elegance”. Without a doubt, this is a step in the right direction for Dark Souls’ already excellent character design.

Next on the list of inspirations are the levels. The first Dark Souls had probably the biggest and most intertwined levels, while Bloodborne had the best designed mazes that were a joy to explore. Dark Souls 3 also has somewhat smaller levels, but just like in Bloodborne, they’re well designed and with the same artistic flare. On the other hand, they look no less grandiose that those from the first game, because using smart and intricate design, as well as broad open locations, leaves an impression of a huge map to explore. 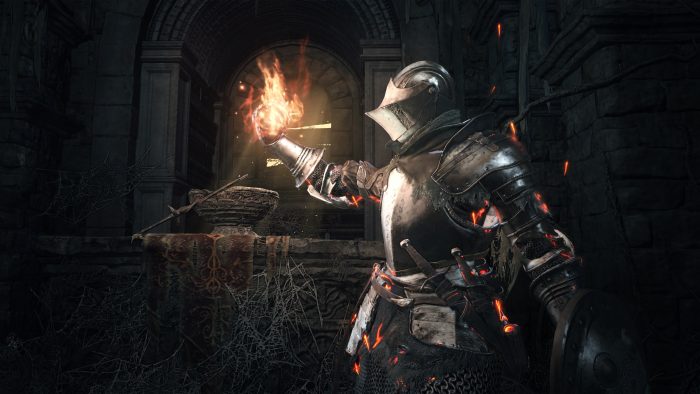 When it comes to the core of every game, gameplay, Dark Souls 3 had its combat system influenced by the speed Bloodborne’s combat. Even though your character won’t be dodging enemy attacks as elegantly as the Hunters, they will still seem more agile than before. Hit combos and weapon abilities were directly added from Bloodborne, and the action now contains elements to help you feel less vulnerable. Every weapon now has its own special actions that look fantastic and are better at damaging enemies. The only drawback is that these moves have a limited number of uses, so they’ll only see limited use until you develop your character to use them more frequently. Furthermore, the great boss battles from Bloodborne are nearly translated into this game, so the enemies won’t be simply repeating the same pattern until they die, instead they’ll boast multiple phases of moves and shapes. And just like in the PS4 exclusive, you’ll be able to stun your opponents and then perform a special attack on them. However, this being a Dark Souls game, you’ll still have to rely on your trusty shield. You will use it not only to block attacks, but also, with good timing, use it to expose your opponent for the above mentioned special attack. All of this and other minor improvements to the combat system combine into an excellent symbiosis, thus featuring the most complete action in a Souls game. Although, we have to admit that we miss watching the monsters hurting each other, as well as the opportunity to recoup part of energy after quick ripostes. Ah, those Hunters sure were something… 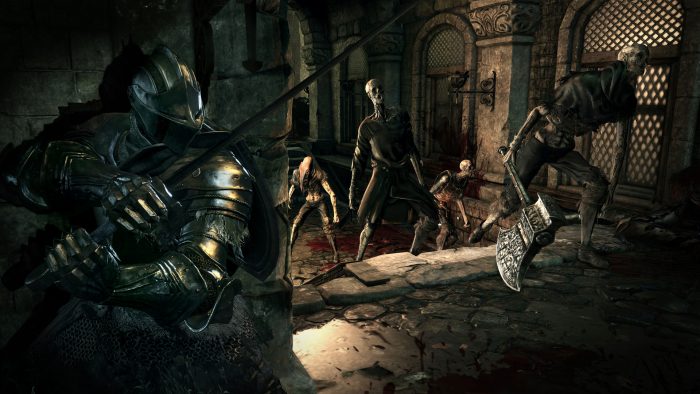 When we compare Dark Souls 3 and Bloodborne in terms of plot, there’s not much to say when it comes to influence. From the beginning Dark Souls had a great story that you could slowly piece together. What it does draw from Bloodborne though is the way it tells the story. Although once again fragmented, using subtle hints, music stings, excellent video sequences and atmosphere, Dark Souls 3 will find its way to the players and enthrall them with its poetic depth. And even though the ending of this trilogy might be less satisfying than we might have hoped, the known availability of multiple endings will surely provide solace to many fans of the series. 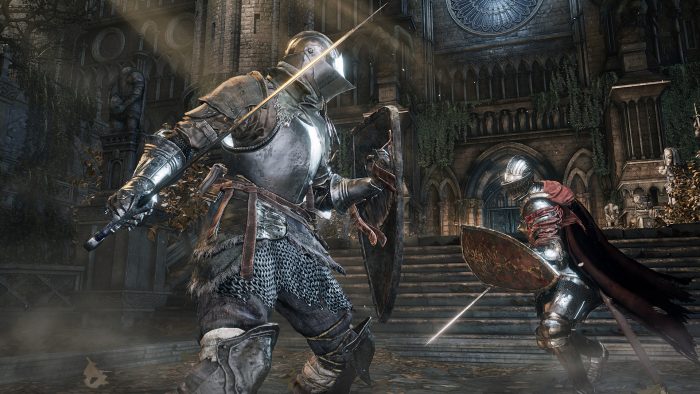 The fifth and final element binding Dark Souls 3 and Bloodborne is a somewhat abstract perception of variation. Although all previous installments have dragged the players along, enticing them with their challenges, Bloodborne had truly reached the level of variations that are so genial, that they got the players so invested not just to simply learn all of the enemy’s patterns, but to also start thinking like they would. It’s not a rare occurrence to get killed by somebody you easily dispatched a hundred times before, just because you’ve underestimated him. The enemies are often cunning and will require your constant attention. But it’s not only them – the levels themselves are full of nasty traps and moments of intense atmosphere, you’ll barely have a moment to relax. So the one thing that Dark Souls 3 manages to accomplish, which is certainly on the level of Bloodborne, is that variable element which makes the player immersion that much more intensive, making him experience every defeat, and making each victory more of an accomplishment. 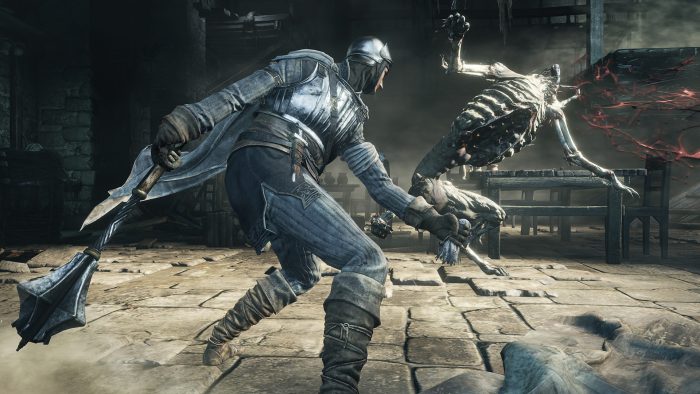 So, is Dark Souls 3 a good game? Without a doubt. It certainly reaches the very pinnacle of a series with an already flawless reputation. Is it faultless? No, but no game is. You will encounter graphics bugs from time to time that will make you laugh; you’ll encounter camera issues, which is still better than the previous games; you’ll encounter framerate drops. The game plays in 30 fps on consoles, while that number’s limit is doubled on PC. But sometimes, in bigger locations, or in the presence of intricately detailed bosses who shower you with a fireworks assault, big drops of framrate are possible. All in all, this isn’t a huge issue, because the game mostly plays extremely well, but it’s important to note that these things will occur. 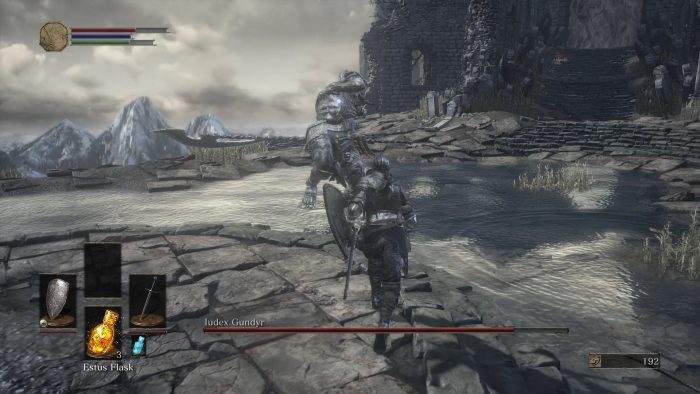 As the (current) conclusion to the cult series, Dark Souls 3 proudly stands beside its predecessors. And even though it’s filled with elements that might seem recycled, it contains so many innovations that you will welcome all of the familiar elements. It’s something of a miracle for a series to have so many installments, and that it almost can’t be faulted for repeated elements. Each game in the Souls series is a small masterpiece. It is rare to find this sort of challenge combined with gameplay so fair that its only requirement from you is to improve your own. Even though it still strives for perfection in its own genre, Dark Souls 3 reminds us how far the series has come to provide us with this wonder of a game. So, be brave and learn from your defeats. Eventually, it will all come to one thing – pure enjoyment.